ISO 45001 reaches next stage in the process

ISO 45001 reaches next stage in the process

ISO/PC 283, the Project Committee responsible for the development of the new international Health & Safety management system standard ISO 45001 met for the 4th time in Geneva between the 21st and 25th September 2015. The purpose of this meeting was to agree the version of ISO 45001 that could progress as the Draft International Standard (DIS) following the review of comments received and issues raised against the second Committee Draft (CD2).

Following the end of the translation period (January/February 2016), the DIS will then be subject to a three month review and ballot by the national standards body.

The next round of meetings planned for ISO/PC 283 are due to take place in late May/Early June 2016. Based upon the volume of comments received against the DIS a second meeting in September 2016 may also take place, if required.

Publication of ISO 45001 can be expected as early as July/August 2016 or as late as March 2017. This is dependent of the volume of comments received. If any comment is of a significantly technical nature, the Project Committee will be required to follow the Final Draft International Standard (FDIS) process and this could add an additional six months to the timescales for publication. 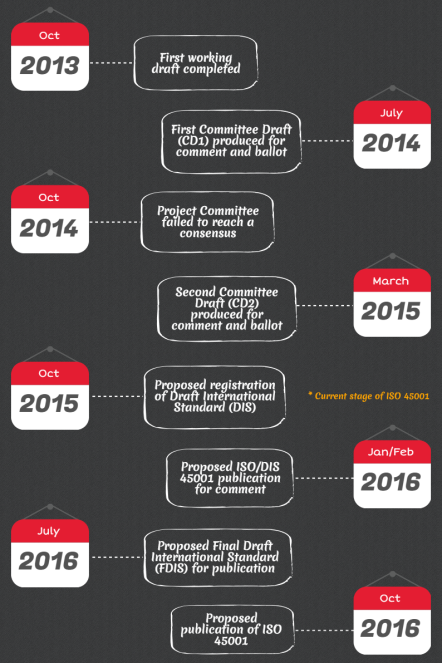