So no prizes as to which option is the best, but what about the worst scenario? Some would argue strongly that it is C as the situation leaves us in a state of limbo, uncertainty prevails and impatience grows. At least with B if we make the wrong decision we now know, can reverse it and at least recover the situation!

I once worked with an organisation whereby Option C was the Chief Bottle Washer’s preference even though he was getting a nice hefty salary to make decisions…..invariably the aftermath of this debacle (a decision making itself) was messy, confusing and sometimes costly…..a frustrating place to work, I left.

So what is the best approach you might ask?

But what about the ones in between? Not particularly complex decisions, little scope for data but important decisions nevertheless ………what then? 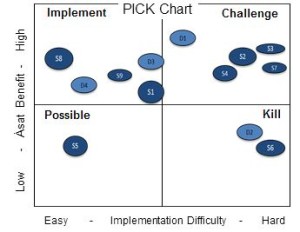 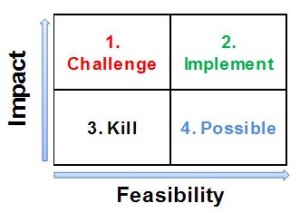 3. A PICK Chart (Possible, Implement, Challenge, and Kill) is a relatively simple tool that can be      used in these circumstances. It has 4 quadrants, determined by the low or high or easy or hard of 2  preselected criteria. Some time and effort needs to be allocated to the selection of the criteria based  on the scenario. These can range from cost, time, and ease of implementation to regulatory risk.

In the example illustrated 13 different ideas were generated in the Improve Phase of a Project to address low capacity on an Assembly Line, with D indicating an idea to address unplanned downtime and S indicating an idea to address Set-up (planned downtime). Each idea is discussed by the Team and consensus arrived on which Quadrant it belongs to, based on ease of implementation and benefit to the Project business case.